BKS Surveys Ltd was a major British survey company which operated across the world. The company was established in Leatherhead, Surrey, in 1956 and relocated to Coleraine, Northern Ireland, in 1969. It became a leader in the creation of digital geographic information and undertook aerial photography and topographical survey projects across the UK, Europe, Africa and the Middle East. 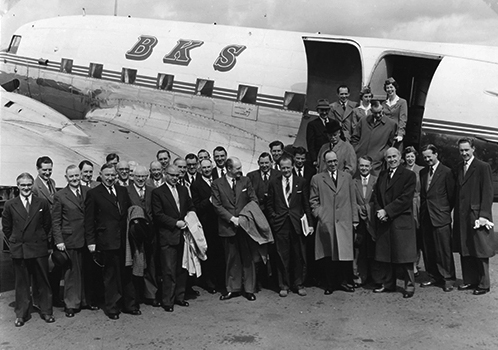 The company offered a complete service by operating its own survey aircraft and ground control teams in the field, and map production, photogrammetry and photographic processing facilities in Coleraine.

In 2008 BKS Surveys was acquired by the Netherlands-based Fugro group of geotechnical, survey and geoscience companies and became Fugro-BKS. In 2015, Fugro shed its operation in Coleraine and BKS (NI) Ltd was formed through a staff buy-out. Its holdings of aerial photography were then gifted to NCAP by its new owners. All but 170 films created by BKS Surveys Ltd from 1956-1986 had been destroyed during an internal reorganisation and these were transferred to NCAP along with 1,200 films dating from 1987-2007.

The BKS Surveys collection is presently closed, pending accessioning and cataloguing. It is not possible to conduct searches within it for aerial photography of specific geographical locations. If a researcher already has photograph references, however, it is possible for us to provide copies of specific images.

As imagery is catalogued and digitised it is uploaded to our website. View online BKS imagery.