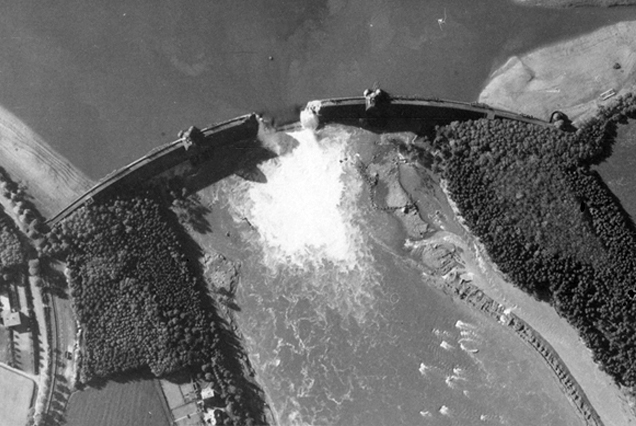 The 70th anniversary of the "Dambusters" Raid fell on 17 May 2013. This was the aerial attack on the Möhne, Eder and Sorpe dams in Germany during the Second World War, which aimed to cause widespread disruption by flooding to industry and communications in the Ruhr valley. The attack was carried out by nineteen Avro Lancasters of the specially-formed 617 Squadron, Royal Air Force, led by Wing Commander Guy Gibson and armed with the revolutionary 'bouncing bomb'.

This feature highlights the imagery in our archives that tells the story of this raid, known as Operation CHASTISE, its effects and aftermath.

Planning for the Raid

To assist in planning the raid, several photographic reconnaissance missions were flown to collect imagery of each of the target dams. The image of the Möhne dam (below) was taken on 5 April 1943 and shows the location of a string of netting close to the dam wall, to protect it from torpedo attack. No barrage balloons or heavy anti-aircraft guns are visible in the vicinity of the dam. At the foot of the high gravity arch dam is the turbine hall of a hydro-electric power station which supplied power to factories in the Ruhr.

No defences were observed at the Eder and Sorpe dams, however it was recognised that the nature of the surrounding terrain would make them both difficult targets to attack. Photographic reconnaissance was vital to the success of the operation as it allowed planners to calculate when the water level behind each dam would be at its highest, in order to time the raid to have maximum effect.

On the evening of 16 May 1943, nineteen Lancasters took off from RAF Scampton, Lincolnshire, in three waves, to head out at low-level across the North Sea towards the Ruhr. Only eleven aircraft would return; eight aircraft and 53 crew-members were lost during the attack. For his actions in leading the attack and drawing the fire of enemy defences away from other aircraft, Wing Commander Gibson was awarded the Victoria Cross; 34 other airmen were also decorated for their actions during the raid.

Bomber Command wanted a complete bomb damage assessment as soon as possible after the raid. Flying Officer Jerry Fray, of 542 Squadron, took off from RAF Benson at 07:30 hours in one of the squadron's photographic reconnaissance Spitfires and arrived over the Ruhr after first light. He took photographs of the breached dams and the huge floods and later described the experience. When I was about 150 miles from the Möhne Dam, I could see the industrial haze over the Ruhr area and what appeared to be a cloud to the east. On flying closer, I saw that what had seemed to be cloud was the sun shining on the flood-waters. I looked down into the deep valley which had seemed so peaceful three days before (on an earlier reconnaissance mission) but now it was a wide torrent. The whole valley of the river was inundated with only patches of high ground and the tops of trees and church steeples showing above the flood. I was overcome by the immensity of it.

Wing Commander Gibson had led four other aircraft to attack the Möhne dam, which held 140 million tons of water and was the main source of water and electricity for industries in the Ruhr valley. It was breached on the fourth attempt, by Flight Lieutenant D J H Maltby. In the image (below left), taken by Jerry Fray, water can be seen pouring through the breach in the dam. The power station has been completely swept away by the deluge.

After breaching the Möhne, five Lancasters had flown on to attack the Eder, which held 200 million tons of water. The high gravity arch dam was breached after 10 attempts by Pilot Officer L G Knight. In the images below, floodwaters from the Eder reservoir can be seen to have inundated the valley below, severely disrupting communications such as roads, railway lines and bridges. The damaged caused by the floodwaters from the Eder and Möhne affected steel production in the Ruhr for the rest of 1943; water pumping stations became silted-up and agriculture and food supplies were also affected by the flooding.

In the image of the Eder (below left) taken two months later, in July 1943, it can be seen that the reservoir has emptied, revealing the former river channel in the valley floor.

The Sorpe dam was a high straight dam of earth construction, rather than concrete, and it was attacked in a dive-bombing manoeuvre. Two Lancasters attacked but failed to breach it. The spread of debris from their bombs can be seen on the parapet and face of the dam in the image (below right) taken two days later.

The dams raid was a huge success, although the cost in airmen and aircraft had been high. The RAF had performed an incredible feat of airmanship in breaching two dams and releasing millions of gallons of water, which inundated almost 40 miles of valleys and killed over 1300 people. The raid was also a great boost to morale for people in the UK and newspapers carried copies of aerial photographs of the breached Möhne dam; henceforth, photographic reconnaissance imagery was seen as an effective propaganda tool.

A post-war evaluation by the Bombing Survey Unit concluded that the effect of the raid on German industry had not been as catastrophic as had been predicted, however, and the dams were in fact repaired and refilled by 1944.

The image of the Möhne dam (below left) was taken in April 1944 and shows that the dam had been repaired, although the emergency sluices on the face of the dam were not rebuilt. The dam's defences had been strengthened, with three rows of anti-torpedo netting placed further out from the wall and a row of timber deflectors positioned along the face of the dam. Heavy anti-aircraft batteries, barrage balloons and smoke-screen dischargers had also been positioned on the hillsides on either side of the dam, to protect it against a further attack.

The image of the Eder dam (below centre), taken in October 1944, shows that this dam had also been repaired and refilled. Barrage balloons, anti-aircraft gun batteries, torpedo boom nets and timber deflectors have been installed to defend the dam.

The image of the Sorpe dam (below right) taken in 1945 shows the positions of smoke dischargers on the shores of the Sorpe reservoir, which are here seen in the early stages of operation.