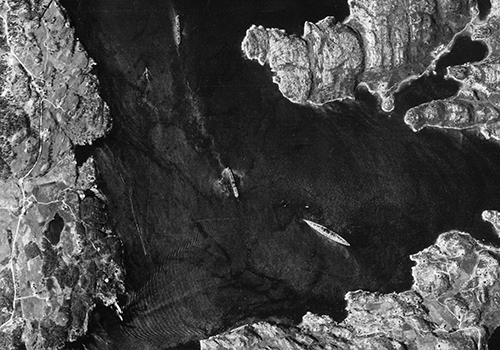 One of the most famous photographic reconnaissance missions of the Second World War was flown from RAF Wick, in northern Scotland, on 21 May 1941. The events that followed would prove to be a great triumph for British photographic intelligence and help to confirm the status of the Central Interpretation Unit as a potential war-winner.

On 18 May 1941, the German battleship Bismarck, accompanied by the heavy cruiser Prinz Eugen, had sailed from Gdynia, on the Baltic coast. British naval intelligence had been monitoring the ship closely, as it feared the consequences of Bismarck slipping undetected into the north Atlantic to attack merchant ships bringing vital supplies from North America.

Two days later, secret reports were received from contacts in Sweden and Norway, that the ships had been sighted in the Kattegat, between the Baltic and North seas. Acting on this intelligence, two photographic reconnaissance Spitfires were prepared at RAF Wick, and their pilots briefed to fly to the Norwegian coast to attempt to locate the ships. Flying Officer Greenhill was directed to search the southern coast of Norway towards Oslo, while Pilot Officer Michael Suckling was detailed to search the fjords around Bergen. At only 20 years of age and possessed of boyish looks, Suckling was nick-named 'Babe'.

Brimming with excitement at his discoveries, Suckling immediately set course for Wick. Arriving back at 2.30pm, his films were quickly removed from his aircraft and sent for developing. With the film still wet, photographic interpreter David Linton carried out first-phase interpretation and confirmed the presence of Bismarck and Prinz Eugen. Noting the activities of the attendant tankers and merchant ships, Linton reported that the ships were probably preparing for the open sea.

Coastal Command headquarters asked for copies of the photographs, to confirm Linton's report. Normally, films were sent from Wick by train but given the urgency of the situation, Suckling was tasked to fly the prints south himself, despite having just returned from a three-hour operational sortie. Finding himself running low on fuel and in failing light, Suckling landed his Spitfire near the home of a friend, not far from his home town of Southwell, Nottinghamshire. Together, they completed the remainder of the journey by car, delivering the prints to headquarters at Northwood, in north-west London, in the early hours of the next morning. There, the prints were examined and it was confirmed that Suckling had indeed photographed the Bismarck and Prinz Eugen. Furthermore, David Brachi, a shipping specialist from the Central Interpretation Unit, confirmed that the ships were taking on supplies and fuel in preparation for a long sea voyage. This analysis allowed the orchestration of a pursuit across the Atlantic that culminated in the sinking of the Bismarck on 27 May 1941.

The value of aerial reconnaissance was thrust into public consciousness by this episode and Suckling's photograph of the Bismarck was issued to the press by the Ministry of Information with the caption, 'the photograph that sank a battleship'.

After being decorated with the Distinguished Flying Cross, Suckling was posted to RAF St Eval, in Cornwall, from where sorties were made to observe the key French ports on a near-daily basis. During a low-level mission to La Pallice, to check on the status of the heavy cruiser Scharnhorst exactly two months after his delivery of the vital reconnaissance images of the Bismarck, Michael Suckling was shot down and killed. 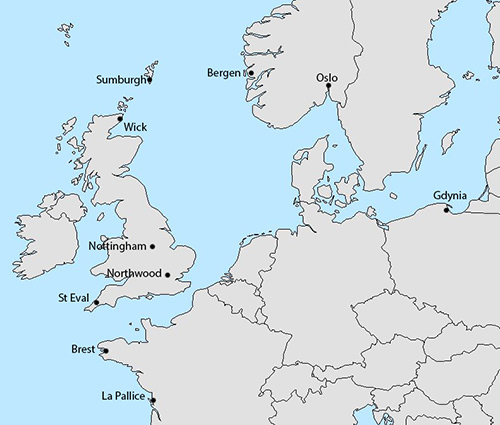