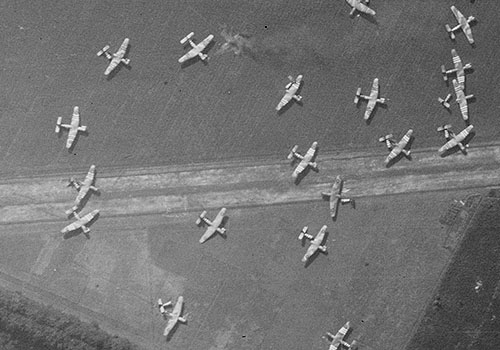 Operation Market Garden was the Allied attempt to sieze key river bridges in The Netherlands by airborne assault in September 1944, to allow the Allies to cross the River Rhine and attack Germany's industrial heartland in the Ruhr. British Field Marshal Bernard Montgomery conceived the plan, and believed its success would end the Second World War by Christmas 1944.

Before an operation of this magnitude could be launched, aerial reconnaissance had to be undertaken to allow photographic interpreters to assess the strength of German defences at the target bridges, select suitable drop and landing zones for paratroops and gliders, study the planned route of the ground troops who were tasked to link-up with the airborne elements, and to identify enemy defences and order of battle in the surrounding area.

On 6 September 1944, photo-reconnaissance Spitfires of 541 Squadron, RAF, were tasked to carry out three low-level sorties over the bridges at Arnhem, Nijmegen and Grave, to collect imagery for use in the planning of Operation Comet, a smaller version of Market Garden employing only one airborne division. Comet was subsequently cancelled on 10 September and replaced by the much larger Market Garden operation.

This feature highlights some of the aerial reconnaissance images taken in the lead-up to the assault, and during the battle for the bridge at Arnhem.