The economic capability of a country is heavily dependent on its ability to generate and distribute electrical power. There are many ways to produce electricity, and aerial imagery can provide information on the type and capability of electricity power plants and transmission facilities.

This feature examines Cockenzie Power Station, East Lothian, to demonstrate the layout of a typical coal-fired thermal power station in the UK. It will be seen that thermal power stations are laid out in a logical fashion, illustrating the flow of materials and processes at the site. 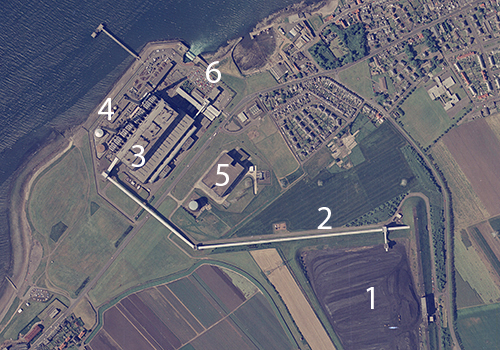 Cockenzie Power Station began generating electricity in 1968 and ceased operating in 2013. When first opened, it was the UK's largest coal-fired power station but ended its life as the UK's least carbon-efficient. It has now been demolished.