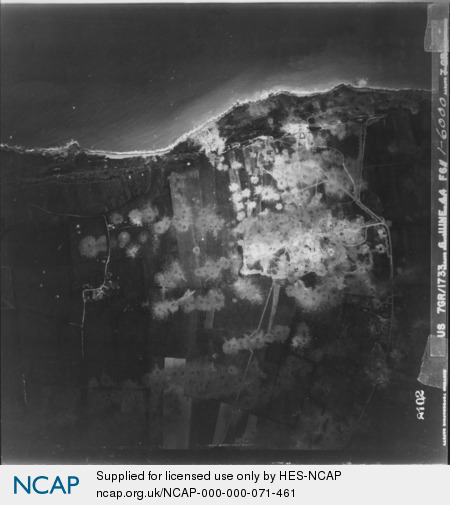 Date: 06 June 1944
Location: Longues-sur-Mer; Lower Normandy; France
Coordinates (lat, lon): 49.343794, -0.696163
Description: The German Kriegsmarine Battery at Longues-sur-Mer is visible in this image, mounting four 152mm guns. Situated at the centre of the invasion beaches, this battery posed a significant threat, as its guns had a range of 14 miles and covered the approaches to Gold, Juno and Omaha beaches. Bombed by the Allies before D-Day, with 1,500 tonnes of bombs dropped, the battery was not destroyed. On D-Day, it fought a duel with HMS Ajax, HMS Argonaut, USS Arkansas, FSS Montcalm and FSS George Leygues and was finally silenced by an assault by the 2nd Battalion the Devonshire Regiment.