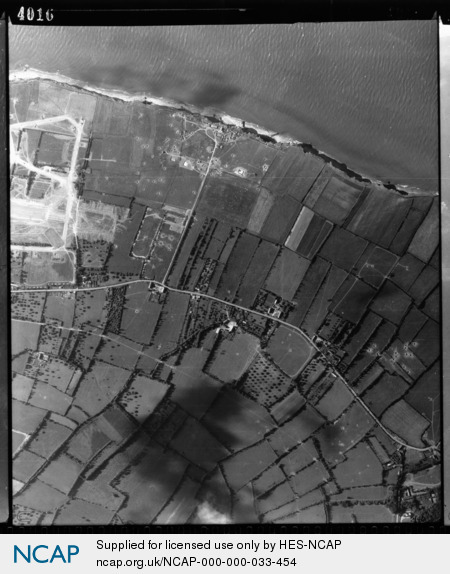 Date: 27 June 1944
Location: Le Haut Chemin; Lower Normandy; France
Coordinates (lat, lon): 49.388812, -0.936815
Description: This image shows the steel mesh runway and taxiways at the eastern end of the temporary forward airfield at Saint-Pierre du Mont, known to the Allies as ALG A1. Many of these advanced landing grounds were built by the Allies in the weeks after D-Day, to allow tactical fighter-bomber aircraft to operate close to the front lines in support of Allied troops. In this image, fourteen Republic P-47 Thunderbolt aircraft (366th Fighter Group) and a Martin B-26 Marauder (416th or 322nd Bombardment Group) are visible, dispersed around the perimeter on square parking mats. The defensive weapon pits and crew bunkers of a wire-bound coastal defence position can be seen on adjacent cliff-edge.